The current ship has its bow portion over both sides, and as soon as boat speed is raised, the water in front of the bow will be pushed out of the sides of both bowls with great acceleration, and the resistance of water goes up rapidly .

Both sides of KurokiShip are very thin and long. Both sides are structures that support the upper structure by the lower structure, and unlike the catamaran that has the role of buoyancy, the width can be narrowed to the extent that the strength can be secured. Also, unlike a mono hull vessel which has the role of a luggage compartment, the tip of the bow stern can be formed into an elongated and sharp shape, and resistance by lateral movement of water can be reduced. 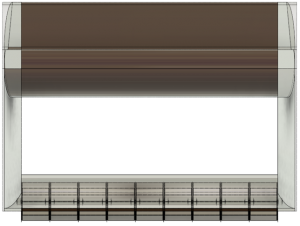 【Shape of bow and stern】

The cargo compartment of KurokiShip is located far above the surface of the water. A space provided above and below the wave is necessary on the water surface flowing through the waterway floor in the ship, and the wave does not hit the bottom of the cargo room due to this space (it is necessary to secure the height of the space that does not collide) is there). Since the cargo compartment is rectangular parallelepiped and the bottom is not rounded and curved, cargo can be loaded in order. At high speed, resistance of air is large and it can not be ignored, and there is also a role of preventing part of the baggage from being blown off, so the cargo compartment covers all six sides.